Being a Good Leader, How do You Handle Disagreements on Your Team? – Ask Mihir Shah 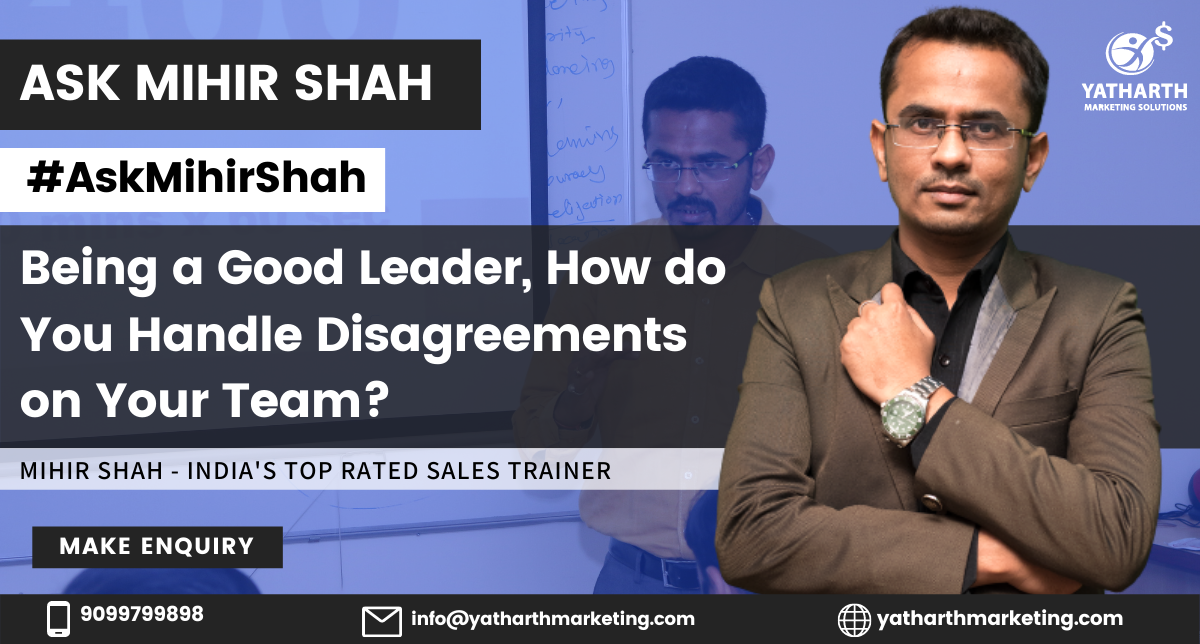 Conflicts often arise when you work together on a team project. The following differences can contrast sharply to your own, creating tension within the group. These differences are not essentially a bad thing, though. Healthy constructive criticism helps create new and creative methods of thinking for the solutions to delegate problems.

There are many reasons for conflict within a team, that includes ignoring the issue, responding with aggressive actions, or even blaming each other in a team. Obvious conflicts usually appear only once, but here are a few tips for resolving the conflict when working together.

Ignoring the issues may save the feelings of a team member for a short time but you may have to work with the same person on future projects. If the issues continue to arise, your built-up may eventually lead to arguments.

Let everyone speak his or her opinions on the conflict. Allowing each person on the team to explain and clear his or her opinion will prevent miscommunication. Plus, allowing them to speak their opinions may bring more agreement and understanding from other members.

While the team members are explaining their viewpoints on the issue in consideration, active listening is important. Pay attention and don’t just jump to conclusions.

Once each team member has explained their views on the conflict, enlist the facts and assumptions made. Simply writing down everyone’s viewpoints on the argument can make things much clearer to the team. However, observing the information as a whole prevents bad arguments.

Many times, friendships in the organization can arise judgments in team projects. The team members may sometimes feel to agree with each other because of the fear of losing a friend. By avoiding these existing friendships when discussing the final team positions, you often avoid this behavior and allow people to view conflicts freely.

Celebrate the Resolution as a Team

Appreciate the contributions from each member of the group. This will make them feel good about finding a solution and leads the entire team to come close because of their unity. Whether this celebration is something like a small email congratulating the team members or an afternoon treat, recognizing the success encourages team bonding.

Mihir Shah is CEO and Founder of Yatharth Marketing Solution, the group specialized in offering personalized sales training programs to corporates worldwide. He is able to draw several years of experience imparting to management, sales, and corporate training serving wide industries. Mihir has assisted companies to grow incomes and enhance customer satisfaction score as well as assisting managers, leaders, and directors enhance the performance of their team with training.


Widget not in any sidebars